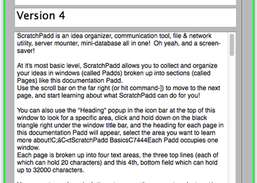 With full search capabilities, ScratchPadd for Mac enables you to document ideas or anything else you'll need to refer to later, just like the Notes app that comes with OS X. While it works fine, it doesn't add anything new to the mix, giving you little reason to download it.

ScratchPadd for Mac feels like having a fully searchable Post-It notepad on your Mac. After we installed it, we perused the Help file, which seemed to describe software far more complicated than what we'd downloaded. We began typing up test notes -- called Padds in this app -- using the three short fields at the top of each Padd for titles or headings, and then the larger field for the body of the text we wanted to type in. The app allows for searching within a Padd or across multiple Padds, and both options function well. We were able to quickly and easily find the notes we had written. Notes can be flagged, as well, according to priority or interest level, which is a nice feature. They can also be locked and private, which requires the user to enter a password to open them. The app also comes bundled with some other redundant tools, which allow you to search for files by type and for words within a file, a task made nearly impossible to understand through its implementation and incomprehensible Help guide.

Use an iOS device as a second display for your machine using a Lightning or 30-pin cable.

Plays the ambient noise of a coffee house to help you work.