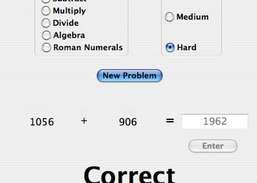 Math Practice for Mac asks you challenging questions covering several math disciplines, including addition and subtraction, multiplication and division, and roman numerals, helping you practice your math skills in a fun way. However, a more attractive interface and the addition of a competitive element would really make this app shine.

While intuitive, Math Practice's interface isn't that exciting when it comes to its looks. You begin by selecting the math skill you want to work on and then choose from three levels of difficulty. The app then throws math questions back at you. One annoying thing about it is that it requires you to click to move to the next problem, rather than automatically loading the problem after you've answered the current one. It does keep track of the number of correct and incorrect answers you submit, so you can see just how well you are progressing. The app gets a thumbs up for the nostalgic 8-bit sounds with which it celebrates correct answers, as well as for the ability to quickly change between subjects.

Save the planet from waves of descending maths questions with correct answers.

Study guide that simulates and helps to prepare you for the Adobe Certified Expert (ACE) exam.