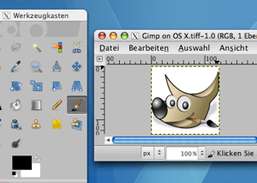 GIMP is a well-known photo manipulation tool that has been ported to the Mac operating system environment. Gimp for Mac is a free app that installs easily. Gimp for Mac is a relatively unique tool. It can be used as a paint program, or as a photo retouching tool, or as an image composition and manipulation program. It is hard to categorize Gimp for Mac except to say you'll probably want it if you do a lot of work with images.

This tool prepares libraries from iPhoto 5 or earlier so they can be upgraded with the current version of iPhoto.

Change the depth of field in your images.

Analyzes image files to look for signs of Photoshopping.