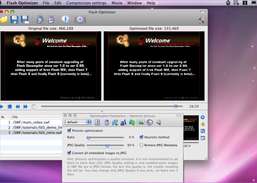 Flash Optimizer for Mac is a powerful, feature-rich SWF compression utility. It easily reduces SWF files size up to 80 percent thanks to amazing algorithms of vectors, shapes, morphing, Z-buffer, fonts, and other optimizations, thus saving considerable amount of traffic and loading time. Unlike any other similar software it manages to optimize not only a separate part of your Flash movie, but the whole SWF, including curves, zero-objects, ZLib optimization and a whole lot more advanced techniques. More than 50 separate compression options, both predefined and customizable, give you full control over the optimization process, meeting an optimum compression at no quality loss. Optimization process preview feature will help you choose proper compression settings for a particular movie. Also handy is SWF info button which shows you details on Flash movies - like size in bytes, percentage of each kind of resources (shapes, pictures, videos, actions etc.) and general size of original and optimized files. Detailed animation view in 1 or 2 players with the zoom in/out function, customizable interface with several layout options make Flash Optimizer for Mac very convenient and highly efficient in use.
Download (12.32MB)

Find and edit a suitable coluor for your works.

Plugin for Final Cut Pro, Motion and After Effects allows you to animate nodes and lines.

Create your own professional 3D animations.