Display quotes and messages from all over the world in English, French and Spanish. 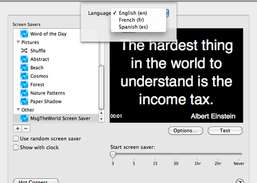 The sheer number of available screensavers makes finding the perfect one for your mood rather difficult. Those users who want to see famous and inspirational quotes as their screensaver will find MsgTheWorld for Mac appealing, but its problematic operation makes it difficult to use.

MsgTheWorld for Mac is available as freeware with no payments required to unlock. The screensaver downloaded quickly and installed directly into the System Preferences area. Upon opening, the screensaver window for the computer is brought up. There were no user instructions or technical support that appeared to be available. Essentially, the program is a screensaver of rotating inspirational quotations from famous people. In addition to English, the program supports French and Spanish, as well. Users with versions of this program on other platforms can add their own quotes for display on other screens. The lack of this feature in the Mac version is rather disappointing. When attempting to access the screensaver's options, the program forces a shutdown due to programming bugs. The basic screensavers did function in its default mode.

Place a beautiful water effects as your desktop's screensaver.

Turn your Mac into a minimalist clock.

Watch photographs of space taken by the Hubble telescope as your screensaver.

Watch aerial views of various places as your screensaver.