Play bingo with your students. 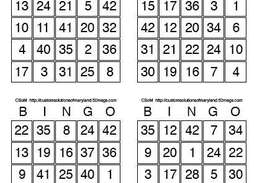 Class Bingo for Mac helps you create basic Bingo games that you can play with your class. However, its rather plain design, lack of features, and clumsy interface make it less appealing than it could have been. The absence of a feature for creating questions is a drawback, but one that does not render the app entirely useless.

Class Bingo for Mac allows you to choose the class size for your next Bingo game and then to quickly scramble the numbers to match the game size. Its basic interface, though somewhat dull, is streamlined, making it approachable even if you're not a bingo expert. Once the app generates the game cards, you have to go to the app menu to find the print option; we would have liked a more convenient button for printing. Other than that, you can take screenshots of the game numbers, and that's about all you get in terms of features. Had the app also offered a way to create class questions, or other game material, it would have been far better.

Study guide that simulates and helps to prepare you for the Adobe Certified Expert (ACE) exam.