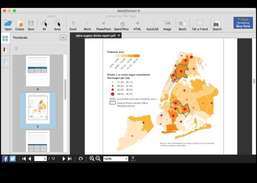 Able2Extract for Mac allows conversion from PDFs to a number of office document formats, something even the newer versions of office software suites don't support. The program offers an intuitive interface and supports conversion to all the major file types such as Word, Excel, PowerPoint, Open Office, HTML, AutoCAD, and to most popular image formats. The program's conversion features are useful, despite occasional failures to load files which occurred during testing.

Convert PDF documents to MS Word and Excel files and create PDF from any printable file.

Convert .CSV files from your bank or credit card to .QBO files for QuickBooks.